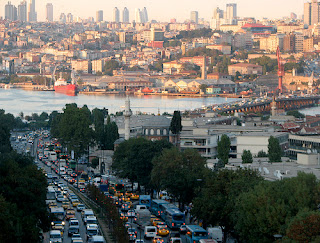 As someone who lived in Istanbul for five years, and still visits, this development is of particular interest to me. I know from experience that the traffic in Istanbul can be horrendous, and that the only way to really move around is on public transport - and the ONLY WAY to cross the Bosphorus is on one of the fantastic ferry boats (forget the car-over-the-bridge option). In this post from TheCityFix called 'Istanbul Gets Bus Rapid Transit' they mention that Istanbul is creating 6 new bus rapid transit lines:

The director of Istanbul Electric Tram and Funicular Company (IETT), Mehmet Ozdemir, announced that the city will build 6 bus rapid transit (BRT) lines (including one already underway) and that construction should be finished by the end of 2008.

Bus Rapid Transit (BRT) is a cost-effective rapid transit solution that acts like an above ground subway but with extra long articulated “accordion” buses instead of rail cars and physically separated lanes so that the buses don’t have to compete with traffic. Passengers pay at the station before they get on and the buses come frequently, just like in a subway.