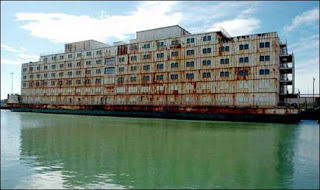 Subtopia has an excellent feature on the vast subject of floating prisons which he rightly says is worth at least a book. The above image was taken from the post which states that:

a few weeks ago took a peak inside them, when at full capacity are capable of holding as many as 576 captured migrants each. Boasting an urban flexibility, officials say, in some ways they are more ideal than traditionally built ground-based prisons or detention facilities because they are now –- if need be –- fully mobile and fully transportable...

...structurally, the prison, we are told, “sits on two concrete platforms, each in turn moored to large steel pilings.” Adjoining them to dry land are “two white domes” specially designed by a Dutch artist (surprisingly enough) “made of a lattice-work of metal” where “the inmates play sports like football or basketball.” The prison boats are entered through small bridges and inside are “corridors of cells” and “communal areas with table football, table-tennis and payphones.” The BBC say the cells each hold two people “with bunk beds, a desk, fridge, TV, even a coffee machine”, while a shared bathroom provides a toilet and shower. Another article

says, “While detainees await their expulsion they are subjected to a fairly mild prison regime with the cell doors opened during the day. There is television in every cell and a communal fitness room, a recreation room, a library, a room for religious services, a film room and an arts and crafts room.”

A very interesting read...and much more material than I have posted...
-
Posted by Kingsley at 10:11 am