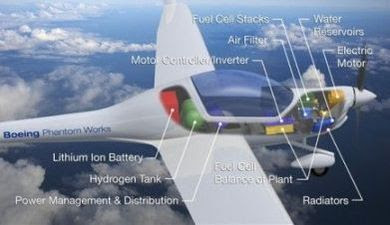 Recent reports show that Boeing's engineers have been working to use fuel cells to power newly designed manned airplanea. A company statement explains:

The demonstrator aircraft is a Dimona motor glider, built by Diamond Aircraft
Industries of Austria, which also performed major structural modifications to
the aircraft. With a wing span of 16.3 meters (53.5 feet), the airplane will be
able to cruise at approximately 100 kilometers per hour (62 miles per hour)
using fuel cell-provided power...

The Boeing demonstrator uses a Proton
Exchange Membrane fuel cell/lithium-ion battery hybrid system to power an
electric motor, which is coupled to a conventional propeller. The fuel cell
provides all power for the cruise phase of flight. During takeoff and climb, the
flight segment that requires the most power, the system draws on lightweight
lithium-ion batteries. Flight tests, which will take place in Spain,
will demonstrate for the first time that a manned airplane can maintain a
straight level flight with fuel cells as the only power source.

Read in full at Danger Room
Posted by Kingsley at 3:54 pm