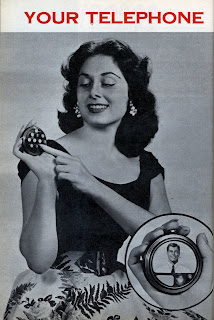 This great piece of 'futurism' from 1956 looks at 'Your Telephone Of Tomorrow' and exclaims that the 'Future may bring push-button dialing, videophones, direct calls anywhere on earth and pocket-size sets'. Here's the opening of the article:

ON SOME night in the future a young man walking along Market Street in San Francisco may suddenly think of a friend in Rome. Reaching into his pocket, he will pull out a watch-size disc with a set of buttons on one side. He will punch ten times. Turning the device over, he will hear his friend’s voice and see his face on a tiny screen, in color and 3-D. At the same moment his friend in Rome will see and hear him.

The disc will be a telephone, a miniature model equipped for both audio and video service. Back in 1952, Harold S. Osborne, retiring chief engineer of American Telephone & Telegraph, envisioned this tiny instrument as the ultimate shape of the phone. In the future, said Mr. Osborne, a telephone number will be given at birth to every baby in the world. It will be his for life. When he wants to call anyone, no matter where, he will merely push the buttons on his Lilliputian phone.

“If he does not see or hear him, he will know his friend is dead,” the engineer concluded.

Read the full article - 'Your Telephone Of Tomorrow'

Thanks to Soledad at Mobile-Society
Posted by Kingsley at 12:52 pm