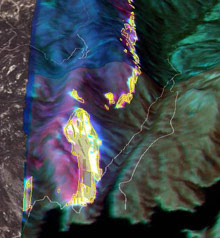 TechReview has been discussing how the National Interagency Fire Center has called on NASA to use its unmanned aerial vehicle equipped with a new thermal-imaging sensor to help track the fires:

The sensor is much more sensitive in the thermal range than are the line scanners that are normally used to map fires. The new sensor can also track a fire with greater accuracy, says Everett Hinkley, the National Remote Sensing Program manager at the U.S. Forest Service and a principal investigator...

...Capturing the images in real time is a major advance. Previously, images captured by a sensor had to be put on a "thumb drive" and dropped out of the aircraft through a tube as it flew near a command station, or the aircraft had to land so that the data could be given to a colleague to perform the analysis.