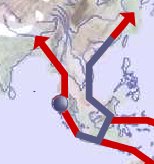 This is an interesting post via Cartography - it deals with the rise in digital mapping, this time to show the movement of the human race:

"The Bradshaw Foundation has an animated world map that displays the movement of the human race from its beginnings in the heart of Africa 160,000 years ago. As well as showing the movement of various groups it also shows the various climate changes over the years, some very dramatic and sudden.

From the website: “We are the descendants of a few small groups of tropical Africans who united in the face of adversity, not only to the point of survival but to the development of a sophisticated social interaction and culture expressed through many forms. Based on a synthesis of the mtDNA and Y chromosome evidence with archaeology, climatology and fossil study, Stephen Oppenheimer has tracked the routes and timing of migration, placing it in context with ancient rock art around the world.”
Posted by Kingsley at 6:11 pm