Are driverless pods the future? 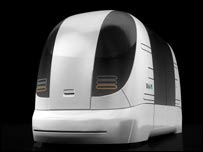 The BBCNews reports on the UK's first personal rapid transport system (PRT) which has no drivers, no rails, no timetables and no emissions, and is set to run at the new Heathrow terminal when it opens:

But while these low-energy, driverless pod-shaped vehicles may look like something from sci-fi epic Bladerunner, they are about to become British transport reality.

In less than two years' time, after the opening of Heathrow's Terminal 5 in March 2008, a network of 18 of these four-seater capsules will be ferrying passengers to and from a business car park to the new terminal building.

Already under construction, the first phase of the airport's £25m PRT will use 3.8km (2.4 miles) of guideway - designated ground-level or raised path - to move people from car to check-in in just four minutes.

However, notice how it states that it is only for 'ferrying passengers to and from a business car park' - what about non-business passengers? Is this just another example of spending millions to create a 'mobility divide'? Like the new CrossRail project set to put a direct train link across London which is mainly to ferry passengers from the airport to Canary Wharf (isn't that another business centre?)...

Read in full - 'Are driverless pods the future?'
-
Posted by Kingsley at 9:56 am