Is this the future - Flying humans?? Perhaps.....and why not if it avoids congestion! 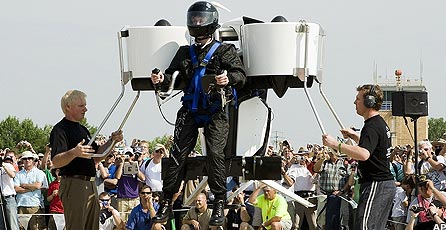 The Martin jet pack can, in theory, fly an average-sized pilot about 30 miles in 30 minutes on a full 5-gallon (19-litre) tank of gas.

The piano-sized contraption costs $100,000 (£50,517) and was unveiled at AirVenture, the annual aviation convention of experimental aircraft at Oshkosh in Wisconsin...The jet pack has been designed to conform to the Federal Aviation Administration's definition of an ultralight vehicle, which weighs less than 254 pounds (115 kilograms) and carries only one passenger.

Although, apparatus like this can be operated by a pilot without a licence, they can't be used over congested areas.