Farms in the Sky 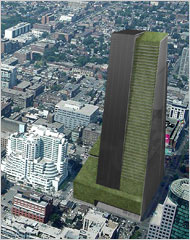 The New York Times has a provocative post that prints the question: 'what if skyscrapers grew off the grid, as verdant, self-sustaining towers where city slickers cultivated their own food?'

Dr. Despommier’s pet project is the “vertical farm,” a concept he created in 1999 with graduate students in his class on medical ecology, the study of how the environment and human health interact.

The idea, which has captured the imagination of several architects in the United States and Europe in the past several years, just caught the eye of another big city dreamer: Scott M. Stringer, the Manhattan borough president.

When Mr. Stringer heard about the concept in June, he said he immediately pictured a “food farm” addition to the New York City skyline. “Obviously we don’t have vast amounts of vacant land,” he said in a phone interview. “But the sky is the limit in Manhattan.” Mr. Stringer’s office is “sketching out what it would take to pilot a vertical farm,” and plans to pitch a feasibility study to the mayor’s office within the next couple of months, he said.

“I think we can really do this,” he added. “We could get the funding.”

Dr. Despommier estimates that it would cost $20 million to $30 million to make a prototype of a vertical farm, but hundreds of millions to build one of the 30-story towers that he suggests could feed 50,000 people.