The Box - A global journey begins 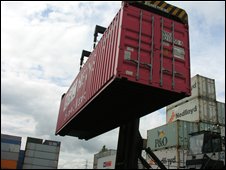 Now here's an interesting project from the BBC. It's called 'The Box' and is a unique project telling the story of international trade by tracking a shipping container around the world for a year!

Worldchanging comments on this by saying:

The folks at the Beeb have started a project with shipping line NYK designed to allow readers to track the movements of a single container over the course of a year. The container has been painted with a BBC URL and fitted with a GPS transponder, but otherwise will function as an ordinary container, carrying loads from one port to another. Its voyage will be visualized on a web map, giving viewers a sense for the vagaries of international trade. (Depending on whether BBC stacks the deck or not, this could also be a stunningly boring voyage, if the container simply cycles between Southhampton and Bruges.)