Clean travel of the future? 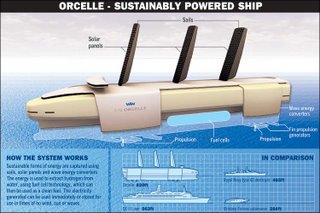 'the E/S Orcelle (the E/S stands for Environmentally Sound). It is the ship of the future - powered by the sun, wind and waves. The futuristic vessel has no conventional engines, uses no fossil fuels and releases no harmful emissions into the atmosphere or pollution into the sea. A pentamaran shaped hull (5 parallel hulls) using aluminium and thermoplastic composites reduces weight and drag. Designed to carry 10,000 cars the 250 metre long, 50 metre wide ship may be the emissions free ship of the future.


Wallenius Wilhelmsen brought together a multidisciplinary team of naval architects, environmental experts and industrial designers under the guidance of naval architect, Per Brinchmann, to work on a visionary design for a car carrier of the future, the E/S (Environmentally sound Ship) Orcelle. A scale model of the ship that demonstrates some of the technical ideas produced by the design team has now been constructed. Intended to provide a vision of what an environmentally-friendly car and ro-ro carrier might look like in 2025, the E/S Orcelle concept vessel has been designed so that it will produce zero emissions into either the air or sea. It can use renewable energy sources, including the sun, wind and waves, as well as fuel cell technology, to meet all propulsion and onboard power requirements.'