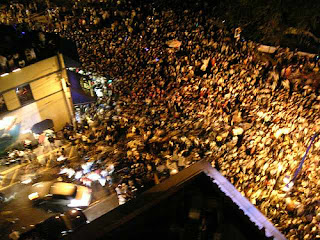 The excellent and highly recommended blog Subtopia recently posted a piece calledUrbanization of Panic (from which the above photo was taken) in which was discussed how 'panic has become the main ingredient that binds the urban experience, perhaps even determines the geopolitical climate as well'. The post also referred to an interesting brief article called City of Panic written by Franco Berardi in the journal Voices of Resistance from Occupied London, from which I take a couple of quotes:

The metropolis is a surface of complexity in the territorial domain. The social organism is unable to process the overwhelmingly complex experience of metropolitan chaos. The proliferation of lines of communication has created a new kind of chaotic perception...

...The city of panic is the place where nobody has the time anymore to get close to each other, for the caresses for the pleasure or for the slowness of whispered words. Advertisement exalts and stimulates the libidinous attention, person to person communication multiplies the promises of encounters, but these promises never get fulfilled. Desire turns into anxiety and time contracts.

The industrial-urban over-stimulation and media-kill is a rising facet of urbanized spaces, along with increased wireless information flows...