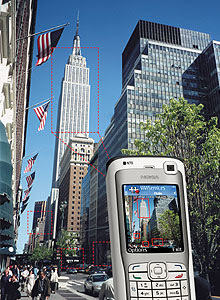 Boxes appear on the phone’s screen, highlighting known businesses and landmarks, such as the Empire State Building. The user can click one of these boxes to download information about that location from the Web. In Nokia’s mobile-augmented-reality prototype, a user can point a phone’s camera at a nearby building; the system calculates the building’s location and uses that information to identify it. Credit: Jean Probert

The concept of digital augmented reality will be a hot topic for mobile platforms in the coming years. This article from TechReview discusses some of the research coming out of Nokia:

Finding your way around a new city can be exasperating: juggling maps and guidebooks, trying to figure out where you are on roads with no street signs, talking with locals who give directions by referring to unfamiliar landmarks. If you're driving, a car with a GPS navigation system can make things easier, but it still won't help you decide, say, which restaurant suits both your palate and your budget. Engineers at the Nokia Research Center in Helsinki, Finland­, hope that a project called Mobile Augmented Reality Applications will help you get where you're going--and decide what to do once you're there.

Last October, a team led by Markus Kähäri unveiled a proto­type of the system at the International Symposium on Mixed and Augmented Reality. The team added a GPS sensor, a compass, and accelerometers to a Nokia smart phone. Using data from these sensors, the phone can calculate the location of just about any object its camera is aimed at. Each time the phone changes location, it retrieves the names and geographical coördinates of nearby landmarks from an external database. The user can then download additional information about a chosen location from the Web--say, the names of businesses in the Empire State Building, the cost of visiting the building's observatories, or hours and menus for its five eateries.

Read more here
Posted by Kingsley at 9:31 am