City scares drivers with ’3D girl’ that runs into road

Good idea or a sure fire accident? The debate is on....and what would be your reaction if you 'think' you saw a young child in the road.....albeit a clever 3D drawing?? 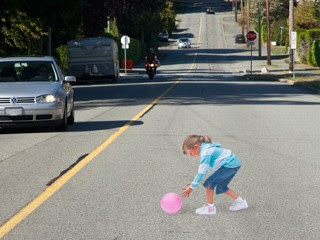 For the past week, drivers on 22nd Street in the ritzy suburb of West Vancouver, British Columbia, have come across an alarming sight: A small girl running out into the road to chase a ball.

As their hearts leap to their throats and their feet move to the brake pedal, the drivers realize it's an illusion -- a "3D" image drawn on the pavement to get drivers to slow down. The "3D girl" isn't really 3D -- it's a cartoon drawn on the pavement in a distorted fashion so as to appear three-dimensional, the culmination of a pilot project from the British Columbia Automobile Association, an affiliate of the AAA, and the city of West Vancouver.

It's an innovative idea that some critics say could cause accidents. "I think it's awful. I think it's dangerous," Sam Schwartz, a former traffic commissioner in New York City, told ABC News. "I think drivers are always scanning and suddenly they see this image up, they may very well panic."