Tesla unveils the electric 'family car of the future'

Tesla Motors continues to 'unveil' it's latest car etc..... the company has been promising alot for a long time and little has materialized. This - reported by the Guardian - is their latest offering...yet their product is still for those with money...and in today's world... will they have missed the boat? 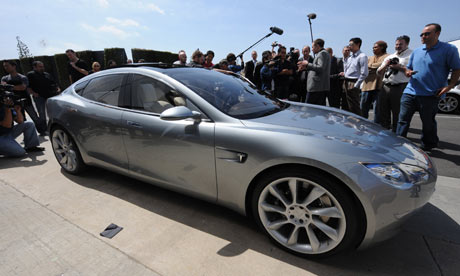 Tesla Motors yesterday unveiled a pair of prototype all-electric cars that the fledgling automaker hopes will be the family friendly, mid-sized car of the future.

"Welcome to Model S," said designer Franz von Holzhausen as he pulled the covers off the cars, which will seat seven people and travel 300 miles (483km) on a single charge.

Tesla hopes to begin producing the flashy, five-door car at a yet-to-be-disclosed location in Southern California by the final quarter of 2011.

Within a year, it wants to turn out as many as 20,000 of the vehicles annually.