How to survive the coming century 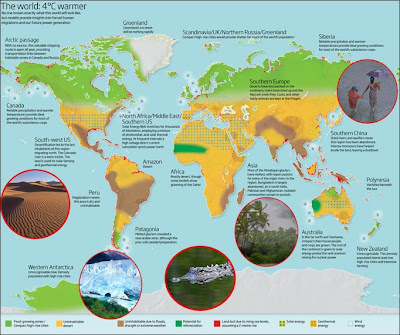 Just how much 'mobility' will be enforced upon us through earth changes and global heating can never be truly estimated. The above image attempts to visualise a global world after a 4C temperature rise, by 2050. The above global changes are based on a recent New Scientist article called 'How to survive the coming century' which says that:

ALLIGATORS basking off the English coast; a vast Brazilian desert; the mythical lost cities of Saigon, New Orleans, Venice and Mumbai; and 90 per cent of humanity vanished. Welcome to the world warmed by 4 °C.

Clearly this is a vision of the future that no one wants, but it might happen. Fearing that the best efforts to curb greenhouse gas emissions may fail, or that planetary climate feedback mechanisms will accelerate warming, some scientists and economists are considering not only what this world of the future might be like, but how it could sustain a growing human population. They argue that surviving in the kinds of numbers that exist today, or even more, will be possible, but only if we use our uniquely human ingenuity to cooperate as a species to radically reorganise our world.

The good news is that the survival of humankind itself is not at stake: the species could continue if only a couple of hundred individuals remained. But maintaining the current global population of nearly 7 billion, or more, is going to require serious planning.

The article was written by Gaia Vince, a freelance science writer currently traveling the world - his thoughtful blog Wandering Gaia is worth reading too.


Read original article - 'How to survive the coming century'