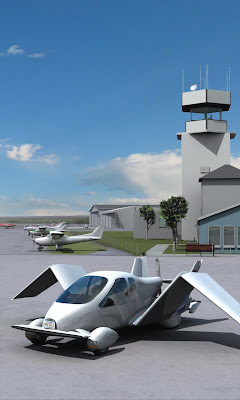 Here's the latest attempt to beat traffic congestion... it's the newest attempt to create the flying-car concept. Yet this one seems to be getting off to a flying start! (sorry....).. and is currently on its maiden voyage.

It is the ultimate off-roader and it is coming to an airstrip near you. The flying car has been talked about for almost as long as cars have existed, and now a prototype built by a small American company is finally ready to make the idea a reality.

The Terrafugia Transition is a two-seater plane that at the touch of a button converts into a road-legal car. It takes its maiden flight next month and is scheduled to hit the showrooms by next year. You can’t help but wonder whether, if Bob Nardelli and Rick Wagoner, of Chrysler and General Motors respectively, had been forward-thinking enough to fly into Washington DC in swept-wing Dodge Vipers and Cadillac Escalades instead of corporate jets when they were seeking bailout cash, they would have been showered with government money, downturn or no downturn.

Read more at - 'The Flying Car'