Can a Flying Car be Successful? 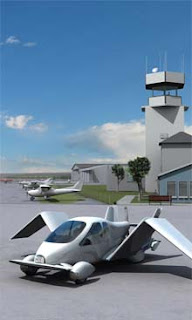 This is a question that has been asked by many innovators. Now, a group of MIT alums believe that they are on their way toward overcoming this problem...or so they claim:

Founded in 2006 and called Terrafugia, their startup, based in Woburn, MA, recently produced the first automated folding wing for a light sport aircraft. (A light sport aircraft is a type of airplane deemed by the Federal Aviation Administration to be easier to fly and hence more accessible than regular private planes.) The wing, however, is just the first step toward an aero-auto hybrid that the company plans to call the Transition.

This summer, the group demonstrated its folding wing at the annual AirVenture aviation festival in Oshkosh, WI. With more than 650,000 attendees, the festival is the most important event in experimental-aircraft aviation.

Read in full - 'Flying Car About to Take Off?'