Finally! A bike hire scheme designed to encourage thousands more cycle journeys in central London has begun...and it's had a great response:

So far, more than 12,000 people have signed up to the idea, far outstripping the 5,000 bicycles which will be available at special docking stations. Transport for London (TfL) has admitted it had been expecting "teething problems".
But it insisted that although members outnumbered the number of bikes, people would not face a shortage.
Already, more than 12,450 keys have been handed out to Londoners enabling them to unlock bikes left at 315 docking points across the city.
The keys cost £3 and the cost of using the cycles varies from £1 for an hour to £50 for 24 hours. TfL and operator Serco expect to roll out the scheme to casual users after a month. 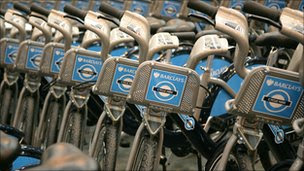 About 12,000 people had signed up to the scheme - with some asking for more than one key.
But only 6,000 keys had been activated. Until they are activated, cyclists will not be able to withdraw the bikes from docking stations.