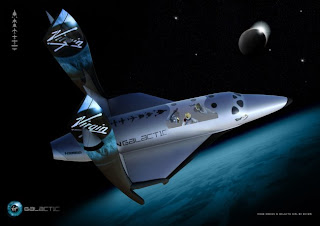 Officials there are busy whipping the town into shape for Virgin's arrival -- evaluating their infrastructure, researching weather issues, and working out potential regulatory hurdles with Sweden and the European Union. Kiruna will join Spaceport America

in New Mexico as a Virgin Galactic operating base, and hopes to see flights begin in 2010 or 2011...

...One of the town's major selling points is its stunning views of the Aurora Borealis

, which could be viewed up close by passengers on board a spacecraft such as Virgin Galactic's SpaceShipTwo.

Read more at 'Swedish City Gears Up For Virgin Galactic Spaceport'
-
Posted by Kingsley at 12:00 pm