Augmented reality is on its way

Charlie Brooker over at the Guardian has written a post on the 2010 coming of augmented reality. But then again, it has always been coming... just never fully birthed. But it may now be 'more ready than ever' to enter into our everyday gadgets: 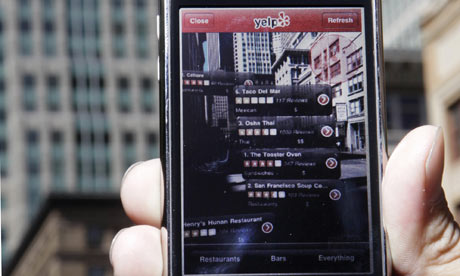 Cause an almighty logjam by shuffling slowly along the pavements staring at your augmented-reality app. Photograph: Marcio Jose Sanchez/AP

According to technophiles, experts, and that whispering voice in your head, 2010 will be the year that augmented reality makes a breakthrough. In case you don't know, "augmented reality" is the rather quotidian title given to a smart, gizmo-specific type of software that takes a live camera feed from the real world and superimposes stuff on to it in real time.

Being a gadget designed for people who'd rather look at a screen than the real world, the iPhone inevitably plays host to several examples of this sort of thing. Download the relevant app, hold your iPhone aloft and gawp in astonishment as it magically displays live footage of the actual world directly in front of you – just like the real thing but smaller, and with snazzy direction signs floating over it. You might see a magic hand pointing in the direction of the nearest Starbucks, for instance – a magic hand that repositions itself as you move around. It's incredibly useful, assuming you'd prefer to cause an almighty logjam by shuffling slowly along the pavement while staring into your palm than stop and ask a fellow human being for directions.


Read more at - 'Augmented reality is on its way'